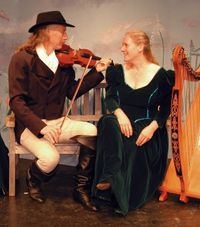 The poet Robert Burns (1759-1796) collected and wrote new lyrics for hundreds of traditional Scottish folk tunes which he felt were falling into obscurity. Working in both the Scots language and in English he produced many masterpieces of 18th-century poetry and song. Among these are My Love is Like a Red Red Rose, Comin' Through the Rye, and Auld Lang Syne, popular even today at New Year's celebrations. His short but colorful life has become the subject of both legend and scholarly documentary.

The duo Castlebay (Julia Lane & Fred Gosbee) have studied the man, the myth, and the music. They have presented lecture/performances for concert series, elder hostels, libraries, and schools in New England, Maritime Canada, New York, New Jersey, Delaware, Maryland, Virginia, Georgia, North and South Carolina, and Florida. In their program romantic love songs are interspersed with lively dance tunes as well as poems and anecdotes about the Scotland's National Poet.

Much of Burns's work is in the Scots language of the lowlands. While related to English there is quite a different vocabulary. Castlebay performs some of the songs in English but most of them in Scots. They have received compliments from American audiences on their ability to make the lyrics understandable and from native Scots speakers on the authenticity of their presentations.

Guest musician Mark McNeil has been a fixture in the Bath area for many years, playing in a number of tribute bands as well as being one of the founding members of Castlebay in 1986. Mark will join us on cello, flute, guitar, and ??? (you never know with Mark)