"What's Castlebay all about? -- Seafaring, the darkness and lightness of the coast of Maine, the rhythm of the tides"
-- Peter Spectre, marine author 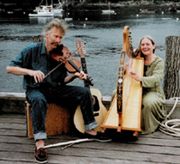 Castlebay treats an audience to a musical journey through time and across the Atlantic as they interweave timeless songs, spritely dance tunes, and haunting aires inspired by the spirit of our rich nautical and Celtic heritage. Exuberant vocals are supported with Julia Lane's unique self-taught, award-winning Celtic harp style, and Fred Gosbee's expertise on 12-string guitar, violin and woodwinds. Their deep appreciation for the unique character of their home state of Maine, as well as the Celtic lands, Castlebay blends history, legend and experience into their personable performance style.

Since 1984 Fred Gosbee and Julia Lane have created a body of work which celebrates Maine's maritime heritage and environment. Known for their arrangements of traditional music, they have also received critical praise for their evocative original compositions; Gosbee for his finely crafted narrative ballads and Lane for her imagery and beautiful melodies.

Castlebay has frequently appeared at sea music festivals in both the United States and Europe They have shared their songs and stories on concert stages from Nova Scotia to Florida where they have delighted audiences of all ages.

Together, Lane and Gosbee have written, recorded and produced two albums of original music, Song of the Sea and The Ballad of Cappy John . These songs depict the lives of those who live by the sea, not only the deep water sailors, but also the shipwrights, coasters, fisherman and their wives. These are the people who established Maine as a maritime legend and who continue to build that legend with their daily lives of skill, hard work and pride.

In 2006 they released a live concert recording of maritime songs, Islands In Time. This CD was recorded in several venues from Maine to North Carolina between 2004 and 2006.

Castlebay tours throughout the year. Bring a taste of Maine to your locale! For up to date information on our schedule, travel plans, and fees please contact us.

The Mackerel Jig/Out on the Ocean

Run Before the Wind 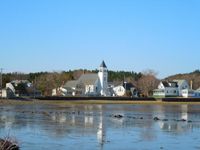