The poet Robert Burns (1759-1796) collected and wrote new lyrics for hundreds of traditional Scottish folk tunes which he felt were falling into obscurity. Working in both the Scots language and in English he produced many masterpieces of 18th century poetry and song. Among these are My Love is Like a Red Red Rose, Comin' Through the Rye and Auld Lang Syne, popular even today at New Year's celebrations. His short but colorful life has become the subject of both legend and scholarly documentary.

The duo Castlebay (Julia Lane & Fred Gosbee) have studied the man,the myth, and the music. They have presented lecture/performances for concert series, elder hostels, libraries, and schools in New England, Maritime Canada, New York, New Jersey, Delaware, Maryland, Virginia, Georgia, North and South Carolina and Florida. In their program romantic love songs are interspersed with lively dance tunes as well as poems and anecdotes about the Scotland's National Poet.

Much of Burns's work is in the Scots language of the lowlands. While related to English there is quite a different vocabulary. Castlebay performs some of the songs in English but most of them in Scots. They have received compliments from American audiences on their ability to make the lyrics understandable and from native Scots speakers on the authenticity of their presentations.

Castlebay is well known for their sensitive arrangements of traditional Scottish music. Both Julia Lane and Fred Gosbee are fine vocalists and support their singing with a variety of instruments including Celtic harp, 12-string guitar, fiddle, Irish flute and tin whistle. They have toured the British Isles annually since 1993 playing at folk clubs, art centres, and festivals.

How does it sound? Try the audio files or watch the concert video on this page.

For information about our touring schedule and fees please contact Castlebay.

Castlebay are members of AFM Local 1000 and are eligible for grant funding from the New England States Touring Roster. Contact NEST for more information.

Of All the Airts

The De'il's Awa' Wi' the Exciseman

"Thank you so much for coming to the Ridgefield Library to share the fascinating life and work of Robert Burns with our audience. What a wonderful evening of music, poetry, and song. You can't get a better combination than that!

Everyone I spoke to afterwards really enjoyed the show, especially the Scottish contingent. I think you probably made a lot of people yearn for the "old country!"

Good luck and thanks again,

Your Performance at Crandall on April 7th was everything I hoped it would be – delightful, entertaining and inspiring. It seemed to me you invited us into a world of music and poetry that was very special. We all had a wonderful time with you, as you shared your knowledge of the life and times of Robert Burns.

I can't remember when I heard a person's life described so truthfully and with such sympathy. Burns is a completely human and flawed character, yet you helped us warm to him and admire him. Your own enjoyment of the music and poetry is infectious. Thank you for sharing your time and talents with us.

Many people in the audience that night came up to me later to thank me for this program, but the thanks goes to you. Let us know when you are next playing in this area."

We played at this great little festival last year. Come on down - there will be lots of music and crafts. 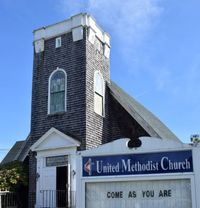 This is a fund raiser to help replace the steeple (which has been off the tower for a couple of years. Here's more about that: https://lcnme.com/currentnews/new-harbor-umc-to-restart-fundraising-for-new-bell-tower/

We'll be doing some of our favorite songs, old and new. This is an outdoor concert. Bring a chair or blanket, and a picnic.